STEP TWO and THREE – FINDING WHAT YOUR CHARACTER WANTS and WHY.

RECAP OF STEP ONE


The task from THREE STEPS TO FINDING A STORY: - STEP ONE was designed to help you find a character.

You should have ended up with

A quick memory jog, your character can struggle
If you aim to finish a novel, or even a short stor,y you will be spending a lot of time with your main character so remember to pick the one who
I chose a stow away on a space craft for my character.
STEP TWO – FINDING WHAT YOUR CHARACTER WANTS.
Follow the same process as you did for STEP ONE.

Pick the WANT or NEED that has the most potential for a story that’s full of What’s the worst thing that can happen now? moments. Full of opportunites for you to write STRUGGLES into your main character's life.

STEP THREE – FINDING YOUR MAIN CHARACTER'S MOTIVATION.
(Why do they want or need what they want or need?)
Follow the same process as you did for STEPS ONE and TWO only this time put the want or need in the bubble. I chose innocent fugitive from justice from my STEP TWO CLUSTER DRAWING. From my STEP THREE - WANT or NEED cluster drawing (not reproduced here) I chose: to find the real perpetrator of the crime and bring him/her back to Earth to face justice.
I can now use the decisions I have made to produce a ONE SENTENCE SUMMARY.
The ONE SENTENCE SUMMARY is the most important piece of information I need to start my story. It will keep me on track as I think about, craft and edit my story.
I haven’t got a name, age, gender, crime, occupation, nationality or race for my character. In fact I have hardly developed my character at all, yet. That's fine. I can do cluster drawing to discover that information later. Right now X, Y and Z will do.
X, falsely accused of Y, stows away on an earth spacecraft to find the real criminal Y and bring him/her back to Earth for justice.
My next logical cluster drawing would be WHAT HAS X BEEN FALSELY ACCUSED OF?
How many times have your read books or watched movies with a similar theme?
Georges Polti, born in 1868, drawing on the work of other writers, concluded that there are 36 basic story plots.
So, don't loose heart if your ONE SENTENCE SUMMARY sounds familiar because this is where the real fun begins.
The task of the creative, imaginative, writer is to tell a story that has been written a million times before in a fresh way. This is where brainstorming with cluster drawings of X Y and Z works brilliantly in helping the writer discover the most imaginative yet credible combinations.
Play around with your cluster drawings over the next couple of weeks until you come up with the ONE SENTENCE SUMMARY that is both credible and imaginative.
This process will help you avoid two dimensional, cardoard cut out characters in predictable situations - a sure sign of immature writing..
[1] The Thirty-Six Dramatic Situations. By Georges Polti)
Posted by story takes time at 1:56 PM No comments:

Three Steps to Finding a Story: Step One

How do I know what I think, until I see what I say?
W H Auden.
STEP 1 is designed to help you discover/uncover/find, your MAIN CHARACTER.
Deep in your imagination there are probably many characters clamoring to have their story told. Staring at a blank page or a computer screen is not the best way to find them.
Mind-Mapping, Cluster Drawings and Brainstorming are similar terms which describe the technique I use in workshops to help people bring that character up from the subconscious imagination to the conscious mind. It's a process that helps you find what you think so that you can begin to say it.
Here’s how it works. 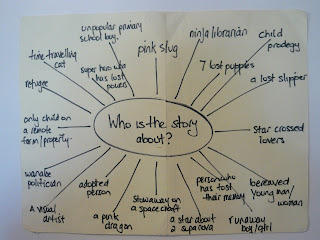 Have a close look at your Character Bubble. My list has some other really odd things on it: Pink Slug. Time Travelling Cat. A Star Goes Super Nova. Oh, and the Ninja Librarian. I would rather not have written Pink Slug but the thought was there so down it went. ‘Pink Slug’ was a bit off the wall and right now I can’t imagine writing a story about a pink slug but it did lead around the circle to ‘stowaway on a space craft’ which I rather like.
By censoring one seemingly silly idea I risk blocking other ideas – one of which might be the best idea.
Before we move onto STEP 2.
What’s the key thing that makes a story an engaging story?

Check out http://en.wikipedia.org/wiki/Conflict_(narrative) for a more detailed analysis of what each element in that list means.
Now have a long think about the ideas that are branching out of you Character Bubble.

Is there one character that
You’ve got a week to ponder over which character grabs you.
Take your time and trust your instincts.
Give your subconscious, your imagination, time before you move on to STEP 2 which I’ll post next week.
If none of the characters around your bubble grab you. Go through the process again but this time
AND
Why the timer? It pushes your brain to shut out the nasty, internal, nagging critic and in some way gives that part of your brain that is imaginative and creative permission to imgine and create.
(If you’re interested in learning more about how this process works read Henriette Anne Lauser’s Writing on Both Sides of the Brain.)
Posted by story takes time at 6:50 PM 1 comment:

Email ThisBlogThis!Share to TwitterShare to FacebookShare to Pinterest
Labels: accessing subconscious and imagination, finding your main character, internal critic, key to writing an engaging story, seven ‘things’ a character might struggle against or be in conflict with

Why Does Story Take Time?

Josie Wannabe-Writer: I'm articulate. I read widely. Why can’t I produce compelling stories with the same ease?
Because story takes time.
Apparently fiction writer, Margaret Atwood, met a brain surgeon at a party. He said he planned to take up writing when he retired. She replied, ‘Really? When I retire, I plan on taking up brain surgery.’
Like so many non-writers or even beginning writers, that surgeon had no concept of the skill, dedication and creativity needed to become a good writer.
It’s not just the mechanics of getting the fantastically creative story written, there’s a lot of other stuff – the craft of writing – that has to be understood as well. 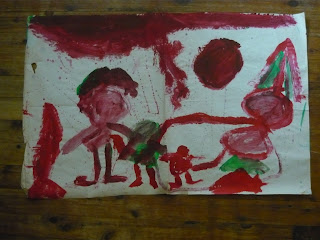 Ralph Waldo Emerson, US essayist and poet said ‘Every artist was first an amateur.’[1]
Fortunately the artist doesn't have to stay an amateur forever. The child artist (above) now runs his own successful graphic design business.


I love this quote from Truman Capote:
'Writing has laws of perspective,
of light and shade,
just as painting does,
or music.
If you are born knowing them,
fine.
If not, learn them.
Then rearrange the rules to suit yourself.’
I really was an amateur when I started writing fiction.

Recently I overheard a woman talking about how her husband read Dostoevsky to their kids. I don't remember being read to by my parents. The literary collateral in my family book bank was well in the red. Pop up story books, Heidi and my mum's Children's Story Bible were the sum of the books in my home. We didn’t have a radio until I was 14. The TV didn’t go on until it was dark outside. This was also before the age of computers and electronic games. I amused myself by creating stories in my head; playing them out like a movie on the screen of my mind. Or, I created characters and scenarios which my friends and I acted out.

When I started to write fiction I launched into my novel with wild abandon and handed the first draft proudly to a friend, an English teacher, for her opinion. I figured she’d recognise my brilliance straight away and, with a snap of my key tapping fingers, I’d have that book published.

I won’t repeat what she said, but her comments were honest enough to propel me into a life of learning about writing. I enrolled in courses, became an active member of the Northern Territory Writers’ Centre, became a workshop junkie, attended festivals, talked with other writers about writing, found proof reading and critiquing buddies, read books about writing, participated in and then ran critique groups, subscribed to blogs, read and read and, well, I'm still reading.

Literary deprivation couldn't have been all that detrimental to my imaginative future. Years later I find myself approaching writing fiction in much the same way as I approached, as a child, my imaginative interior world and play life.

I think deeply about characters, their goals, motivations and struggles and sketch out a basic story line; rejecting many ideas before I feel confident about proceeding with one. Most of this happens in my head and, by some bizarre law of nature that forgets the shopping list five minutes after I’ve written it down, I remember most of my thinking about what I’m planning to write.

In 2009 I moved from a thriving writing community in Darwin to the country town of Dubbo where there appeared to be very little happening to help and support writers. My workshop junkie days were over. Or where they?

I’ve conducted over twenty five fiction writing workshops in the last two and a half years and discovered that not everyone is wired for story in the same way I am. For many of the participants, the initial problem is starting. Once they try to write, their minds go blank and they feel totally cut off from their imagination. They know the story is there but…

Borrowing from a number of sources, and trying different ideas out on workshop participants, I’ve developed a technique that gets many would be writers started. It’s a subtle, easy and fun way of accessing the mysterious place of the imagination.

This blog, then, is for people who, like me, are not geniuses. People like me who need to learn the laws that go into crafting a good piece of fiction and, having nailed them, will know which laws to 'rearrange' and why. And, more importantly, people who live a long way from major cities and can't lock consistently into a rich community and culture of creative writing workshops, courses and classes.

I'll be publishing Three Steps To Finding Your Story in my next blog.

If finding the story is not your problem, skip those blogs and see you in a few weeks.

Aiming to have this up and running by the end of June.
Posted by story takes time at 1:13 PM No comments:

story takes time
Dubbo, NSW, Australia
In a previous life I was an art and drama teacher. Now I write and run creative writing courses.